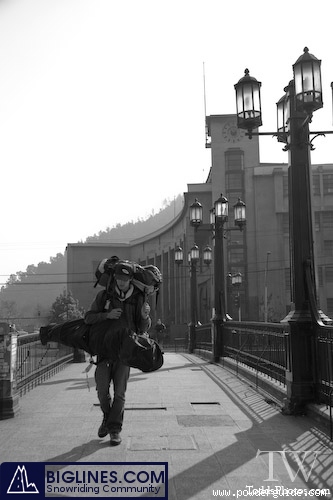 After everything that could go wrong went wrong, the gods finally smiled on us and dumped 30cms of fresh, breathless powder on Termas de Chillan on Tuesday night. We woke up to a foot of dry snow piled on the bannister on the deck, and immediately the trials and tribulations of the past week were out and the electric energy of a pow day was in. Yeah!!!

To recount the joys of travelling, I got stuck in the Lima airport for 2 days after I thought my flight was at 1.40pm rather than am. You would think I would know to check that by now, but I didn't. Some things never sink in. 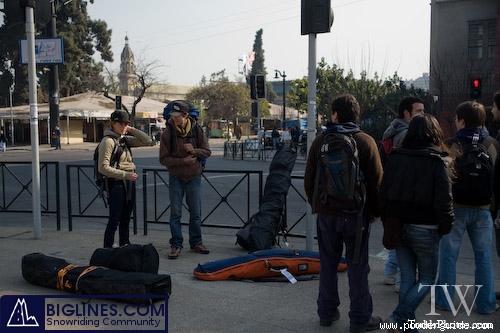 I managed to miss another flight...

...that night because in the year 2007, the airline didn't accept credit card. I was resigned to spending the night on the cold tiles of the inhospitable airport, and waking up in fits, clutching for my bags out of fear they had been stolen.

I finally managed to park my arse on an air plane seat and I fastened my seatbelt before the call to board had stopped echoing down the cement halls of the terminal. I had to get to Santiago. We were going cat skiing.

I paid 3 times the going rate in the early morning hours for a taxi to the hotel, and when I arrived, the Renta car we had booked hadn't arrived and we were leaving at 7am. In short we didn't manage to find a renta car at 6am on a Sunday in Chile. I didn't really care anyway. I hadn't slept for over 30 hours.

The next night, things did get worse.

Amidst chasing girls around a funky salsa club, my credit acard and cash went missing. A friend lost her passport and all her cards and ID. Another friend had her drink spiked and we were spinning out of control as we tried to get out of the city to ski something. Even if it hadn't snowed in a while, it seemed like the safest thing to do. 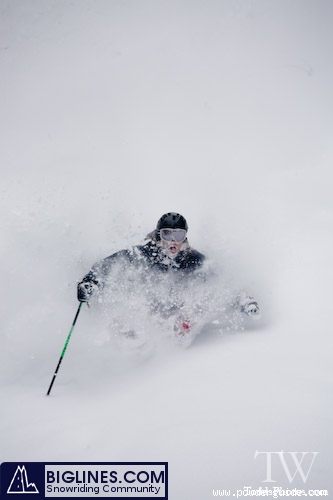 Monday morning, surviving on loans from Todd, we escaped on the bus to Las Trancas, bound for Termas de Chillan. The forecast on the web was predicting a big storm in the southern ranges, so we took the gamble and headed down.

Along the way I managed to miss the last bus after going in search of tapes for the camera. The bus schedule said 6pm, giving me 30mins, but the bus filled up, and so it was gone.

I jumped in a taxi and set off on a high speed chase to catch the bus. It had a 15min headstart, but the deft skills of the driver reeled the bus back in 5mins. Reunited with my friends, it looked like I was going to make it at least to the town at the base of the mountain.

The snow never came and we knew the skiing was going to be horrible if it didn't, so we took it easy on Tuesday, catching up on sleep and checking ourselves for any unnoticed wounds both physically and mentally that the previous days had taken on us. We were warm and cosy in the beautiful MI Lodge in Las Trancas, and in the afternoon the world gained clarity again as big flakes of snow began to fall slowly. By night fall it was puking and it was looking like our gamble would pay off.

At 7am the snow on the railing was piled a foot high and the trees were caked. We loaded the shuttle with all our gear and checked into the glamourous Gran Hotel on the mountain at Termas, where they were putting us up for the next few days. We grabbed our passes and headed up the hill, excited about the prospect of the day awaiting us. 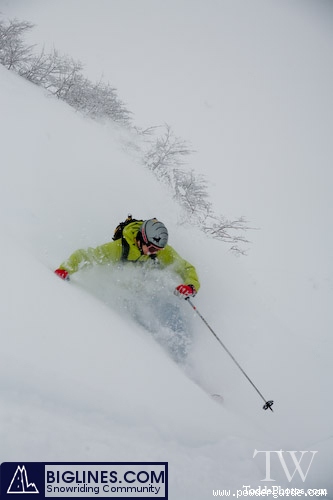 No crowds, no lift lines, face shots every turn from top to bottom.

Only the base of the mountain was open due to low visiblitiy, but that was best the snow was. Hidden, sheltered, protected and waiting in the trees where countless face shots and cold freezes as the snow tickled down our jackets. We shredded the Japanese Forest with its lichen clad, old growth trees spaced perfected for top to bottom skiing. We ventured into the alpine a little and followed our skis through the milky fog, grinning from ear to ear at how good we had scored it.

And it's just the beginning. Tomorrow will be bluebird and more than half the hill is yet to open. Game on!

Im glad Im here now, but Sth America was definately out to see bad I wanted it. Sitting in the Thermal Springs this afternoon with some local rippers we had teamed up with, all the hardship didn't matter any more.

And tomorrow will be more of the same. Life is good. 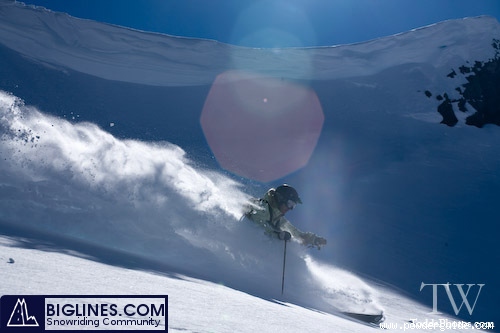