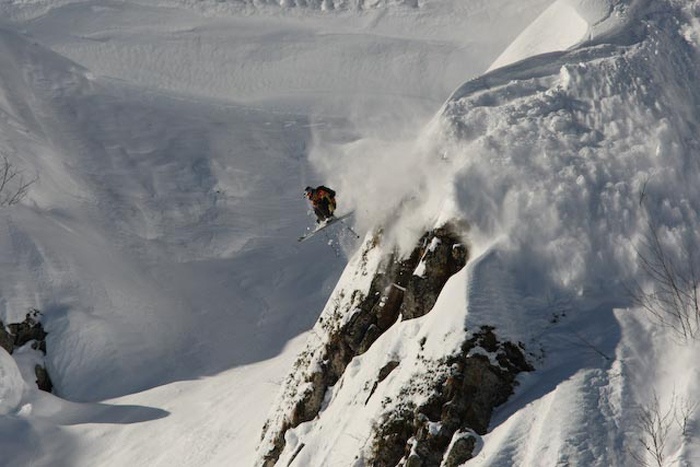 Seb, thank you for taking time to answer our questions. Amongst our user we have some young guns who might not know you. Please sketch with a couple of words the person Seb Michaud.
Ola! I?m Seb Michaud and 35 years old. I live in La Clusaz, France with my wife and kids. My career started in freestlye (moguls) which was a good prep for the nowadays freeskiing. 12 years ago I became a pro skier. When not on the road I try to go as often as possible riding with my friends. The off season is packed with rock climbing and soccer.

After legends like Tone Valeruz, Sylvain Saudan set the benchmarks; skiers like Glen Plake triggered the world wide movement of freeskiing. Just after these sportsmen your generation came up to make freeskiing popular. What made you getting out of bounds not sticking any more to the groomed slopes?
Well, I prefer offpiste skiing since you can play with the mountain in the means of drawing your tracks according to the variables of a slope. Presently material is evolving and allows us to go faster and higher.

You became a professional extreme skier. While other pros are trying to push the limits towards unskiable lines taking a basejump into account or even speedflying; you are keeping it like it was. What are your personal limits?
It?s completely different when you are alone or you have a family – your way of skiing changes. You focus even more on every detail like material, snow conditions, body fitness etc. Basically I want to stay alive, so I fix my limits for that.

Since decades you are part of the freeride scene. A lot of pros are earning their money with filming whereas others are participating at extreme ski contests such as the Freeride World Tour [FWT]. I?ve seen you in contests as well as recently in the movie "Up in snow?. What are you focused on and why?
The FWT is good for our sport. The organizers are seeing everything through the eyes of the athletes. For me personally there are two main points: I like the format; we can?t check our lines directly on the slope. This is the same spirit like going filming or just skiing for yourself. The second point of interest is that there is more media coverage for each rider. But under the line, I like to travel and ski with my friends. 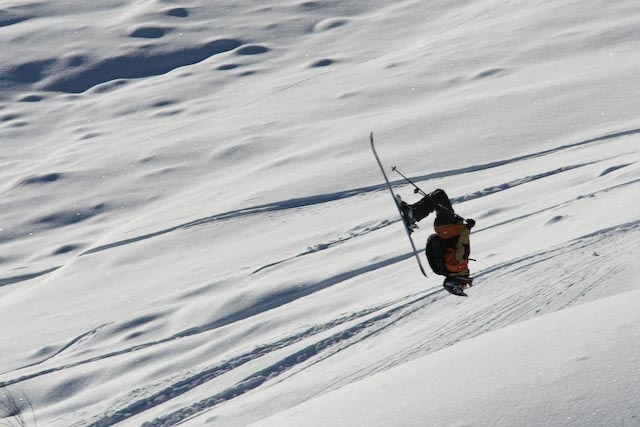 Even before Seth Morrison you dropped massive cliffs with enormous back flips or even winning the "Sick bird award? with sick Spread Eagles from 30 ft cliffs. How did you get started in dropping cliffs and what made you going upside down? You just do not through yourself into the unknown.

The sensations in the air are just amazing. 14 years ago I?ve been in the freestyle ski school where I learned back flips. Therefore its quite easy for me to do them off different obstacles. In competitions, if the conditions allow, I try it for the show. Regarding high cliffs – I don?t really remember how I started to jump them. It?s just a part of freeride skiing. By the way, my weight helps me a lot: 65kg.

You are just back from Sochi where the first FWT took place. Could you sketch in a couple of words the schedule of the FWT?

True, I just came back from Russia 2 days ago and it was the first FWT event. In one month, we fly to the states to the next contest. There in Squaw Valley the Tram face presents the challenge. I rode it already about 12 years ago, but back than it was forbidden. Maybe the patrols will put me in jail? if they can catch me. Afterwards we hop back to Europe where Tignes is already waiting. The final will take place in Verbier on the Bec des Rosses. I tell you, the schedule for March is pretty packed.